There’s an old trick that kids play with each other, in which one kid has a penny in his hand, then waves his hands back and forth, then puts both of them behind his back and says, “Which hand?” If the other kid guesses correctly which hand the penny is being held in, he wins. But often, the first kid has time to swap out the penny to the OTHER hand just before the reveal, so HE wins. If the second kid never catches on, the first one can win this every single time. 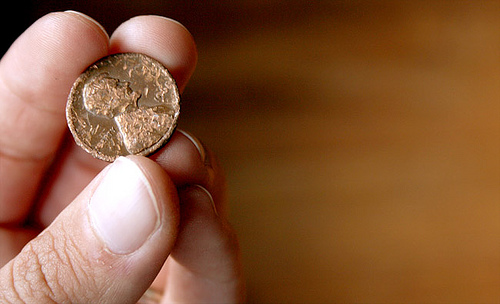 My father passed away a little more than two weeks ago. I have not yet cried over this; in fact, with the exception of a vague, achy and persistent weariness, I have not felt much at all. Yet every night in my dreams, I am losing something, Sometimes I have lost my car in a giant parking lot; in other dreams, I have lost my locker combination, or my dog, or my wallet, or, in one peculiar dream, a vial of T-Rex DNA.

At first glance, these two paragraphs have nothing to do with each other, and neither one seems to have anything at all to do with church. And yet, they do.

I believe my heart is playing “Which Hand” with itself, by switching up my grief with weird dreams of losing random things of great importance. Especially the DNA. My dad was 95, and while that does not qualify him for having lived through the Jurassic period, it does seem to suggest that he was part of a past we’re not getting back.

And so it is with church. When I come across an older person who is standing aside, watching with forlorn amazement at the torn jeans and crop tops walking by, I begin to get it. When I hear a middle aged man talking about how it used to be quiet in church when HE was a kid, I begin to get it. And when I see a teenager sullenly ignoring the group of adults who have dragged him into their cheery post-church conversation, I begin to get that, too.

We can’t choose what hurts us, but we can choose how we mourn it. And often we do it without even realizing it. It’s called transference, but you could just call it the penny trick on steroids.

A mother begins to fear that her opinion matters less to her adult daughter these days, and so she sees the torn jeans and feels an odd resentment and loss. An older man worries that he’s not as strong as he used to be, and so the sound of boisterous energy and laughter begins to feel like a taunt. A teenager who suddenly finds himself less adorable and more prone to adult mistakes certainly doesn’t want to stand around with adults who are pretending they all know exactly what they’re doing about everything.

Which hand is the penny in?

It takes courage to lay out your wounds on the table like a deck of cards and take stock. They’re not pretty. Some of them ooze. It takes a strong stomach. And it’s not just a one-time deal. It requires daily, sometimes hourly dedication. It can be depressing. It can be daunting. It can give your hands a cramp, keeping that penny behind your back and switching it back and forth, back and forth, between your closed fists. Don’t be surprised if you fail, and often.

But the good news is, once you see the cards, and once you feel the sting of the pain, other things start to hurt less. The holey jeans become mysterious, but not insulting. The conversation may still be weird, but it’s not boring a hole in your chest. The laughter might actually make YOU laugh, too. It helps to know that we all have that deck of cards, we all are holding pennies. Nobody gets off free.

I have no advice for this process. I certainly can’t say I’ve mastered it, as I continue to dream about fossil DNA. But I can say, on the rare occasion when I kept the penny in the same hand and let my friend win, it wasn’t all that bad.

In fact, it was a relief.

Baby boomer, church mouse, INFP, bookworm, couch potato, eater of Oreos, napper. Generally trying to navigate my world with a wobbly faith while not tipping over. Terrible blogger - waaaaaaaaaaaaaaaaaaaay too much time between posts. VERY fond of carbs. You've probably seen me being walked by my dog, who has a bigger online following than I do. By the way he says hi. View all posts by Training Wheels 2.0

2 thoughts on “Which Hand?”